Professor Sri Ram Khanna received his M.Com from Shri Ram College of Commerce in 1975 and Ph.D degree from the Department of Commerce, Delhi School of Economics, University of Delhi in 1980. He also holds a degree in Law. Currently, the Head of Department of Commerce, Delhi School of Economics, University of Delhi, Professor Khanna took up the teaching career and alongside took active interest in the consumer movement and its varied facets including consumer and competition law and redressal system. He has served on the Central Committee for Food Standards (CCFS) and The Bureau of Indian Standards (BIS) of the Government of India as a consumer representative for a number of terms since 1984.As Managing Trustee of VOICE, which was set up at theDelhi School of Economics Campus in 1983, he has been working on food safety issues.

He is currently the Managing Editor of Consumer Voice magazine, which publishes comparative product testing results, and a member of theCouncil of Consumers International (CI), London which consists of over 250 consumer organisations in 110 countries.

He has participated and presented papers at various seminars, conferences and workshops at the national and international levels in different countries of the world. As an academic expert, he specialises in Marketing and International Business. Hisunderstanding of the complex field of WTO, international law, consumer affairs and food safety provides a unique multidisciplinary framework. He is a highly acclaimed consumer activist of India and was awarded the Indian Merchants Chamber Award for Consumer Protection in 2001.He has published three books and a number of papers in national and international journals. 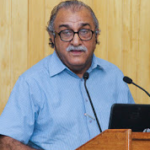