Lalit Agarwal, is the Chairman and Managing Director of V-Mart Retail ltd., Mr Agarwal, is a retail baron, who has a rich experience in diverse field of industry, and a proven track record of building businesses, both as a professional CEO and as an entrepreneur with over twenty years of experience in setting up a printing, packaging and retail industry. He is considered a pioneer of modern retail in India. He is the one who has brought the concept of organized value retailing in tier II and III cities. He holds a Bachelor’s Degree in Commerce from Bombay University, and a Diploma in Financial Management from the Narsee Monjee Institute of Management Studies, Mumbai. His leadership has led the company transform into leading players in retail sector.

With a vision to establish the concept of organized value retailing in certain untapped regions of India, he started its own venture under the Brand Name of “V-Mart“ and launched first life style store at Ahmedabad in 2003. This store was recognized as the First Organized Life Style Retail Store in Western India for the middle and lower segment.

Mr Lalit Agarwal, is one of the privileged member of RAI from Northers Region. Under his leadership V-Mart has won many prestigious awards, the group has been chosen as an Indian Power Brand- 2012-2013 by Planman Media, the brand has been given “Most Admired Retailer of the Year”:- “Discount Retail” by Images Retail Award 2011. The brand also has won the “Most Admired Retailer of the Year”:- “Concept Store” by India Retail Forum 2011.

And the success story continues…. 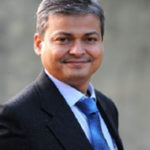