Mr. Mohanty started his career as a Merchandising Manager with Jay Gee Group (a licencee of The Walt Disney Group) with the responsibility of the product management of Disney brands. He moved on later to work with Arvind Lifestyle Brands Ltd. as Senior Merchandiser – Newport followed by Levis Strauss & Co.as Product Manager and then on to Madura Garments as General Manager & Brand Head of SF Jeans.

Thereafter joined the Benetton Group as Director – Commercial in October 2004 moving up to becoming Regional Commercial Director (India & South East Asia / Pacific) and finally being appointed as the Managing Director. During his tenure of 11 years with Benetton, he was responsible in bringing about a striking turnaround in Benetton’s business and revenues and thereby making it a top fashion brand in India.Left Benetton after a rewarding career and joined  Jabong.com for a short stint.

He has now taken up his new assignment with Levis Strauss & Co. as Managing Director – South Asia. 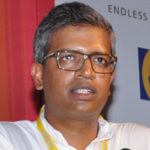