T. S. Kalyanaraman is an Indian businessman best known as the Chairman and Managing Director of Kalyan Jewellers and Kalyan Developers. Kalyan Group is the holding company of Kalyan Jewellers. Kalyanaraman was born in Thrissur, into a Tamil family. He learned the business from his father when he was 12, by helping his father in his shop. Later he joined Sree Kerala Varma College and studied commerce.

He started his first jewellery shop named Kalyan Jewellers in Thrissur City in 1993 with a capital of Rs 7.5 million. Later he expanded the business to 32 showrooms all over South India. In March 2013, Forbes Magazine’s latest annual tally of billionaires has listed Kalyanaraman in 1342th position with a net worth of $1 billion (Rs 54 billion). 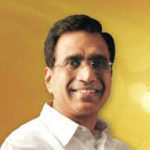