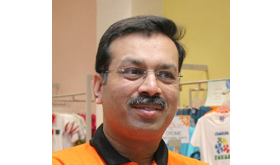 sanjiv Goenka is the chairman of RP-Sanjiv Goenka Group which has an asset base of over INR 32,000 crore (over US$ 4.8 billion). The Group has over 50,000 employees and over a hundred thousand shareholders with annual revenues of up to INR 16,000 crore (US$ 2.5 billion). Alongside being the chairman of CESC Limited, he also has under his wing, companies like Firstsource Solutions Limited, Philips Carbon Black Limited, Spencer’s Retail and Entertainment major Saregama Limited. Besides, he is also the co-owner of ISL football club, Atlético de Kolkata. The IPL team of Pune cricket franchise is also owned by Sanjiv Goenka’s New Rising. On 20 May 2015, Mr Sanjiv Goenka was honoured with the highest civilian honour from the West Bengal, ‘Banga Bibhusan 2015’ by the Hon’ble Chief Minister of the State, Mamata Banerjee and the Governor of West Bengal, K. N. Tripathi.
Mr. Goenka has been the youngest-ever President of Confederation of Indian Industries (CII). A past Chairman of the Board of Governors, Indian Institute of Technology (IIT) Kharagpur, he is also a former President of All-India Management Association (AIMA). Currently he is Chairman of International Management Institute (IMI) which has campuses in Delhi, Kolkata and Bhubaneswar. Mr Goenka is presently a Member of the National Foundation for Corporate Governance set up by the Ministry of Corporate Affairs, Government of India. He was also a Member of the CII National Council on Corporate Governance and Regulatory Affairs for the year 2013-14.