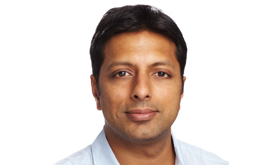 Agarwal joined Amazon.com in 1999, and has led several new initiatives in the formative stages of Amazon’s seller, web-services and external payments businesses, and played a crucial role in Amazon’s recent international expansion efforts. He has served in a variety of leadership positions including: Director of Technology Amazon Web Services (AWS), Managing Director for Amazon’s development center in Bangalore, Global Technical Advisor to Jeff Bezos, and Vice President International Expansion.

Agarwal lives in Bangalore with his wife, daughter, and son.