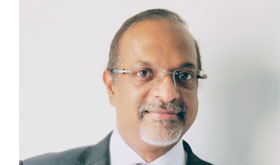 Mr. Venu Nair, 53, is the Managing Director and Chief Executive Officer of our Company. He is an International Retail Leader with 27 years of rich and varied experience in the Retail & Apparel Industry across South Asia & Europe.

Venu was the CEO – Westside at Trent Limited, from January to October 2020. Prior to that Venu was the Chief Commercial Officer – Trent Ltd, from April 2017 to December 2019, where he was responsible for all its commercial operations, including merchandising, store operations, E-com, projects, marketing, visual merchandising, IT, business excellence and Landmark stores. He was Managing Director – Marks & Spencer Reliance Pvt. Ltd, from 2012 to 2017, where he played a pivotal role in its growth. During his tenure, the turnover of the business tripled and the number of stores under operations, more than doubled, with a significant growth in local sourcing. He was Director, MSI & Head of Region (South Asia) from, 2004 to 2012 – Marks & Spencer Plc, wherein he had the dual responsibility as Head of Region (South Asia), and Director of M&S, India for Marks & Spencer Reliance Pvt Ltd, which operates the M&S stores in India. Prior to that Venu was based in London, working for M&S, UK. He has also worked in Madura Garments and Arvind Mills.

Venu is a Bachelor of Technology (Hon) from NIT, Calicut and a MBA in Marketing from S.P. Jain Institute of Management and Research, Mumbai.